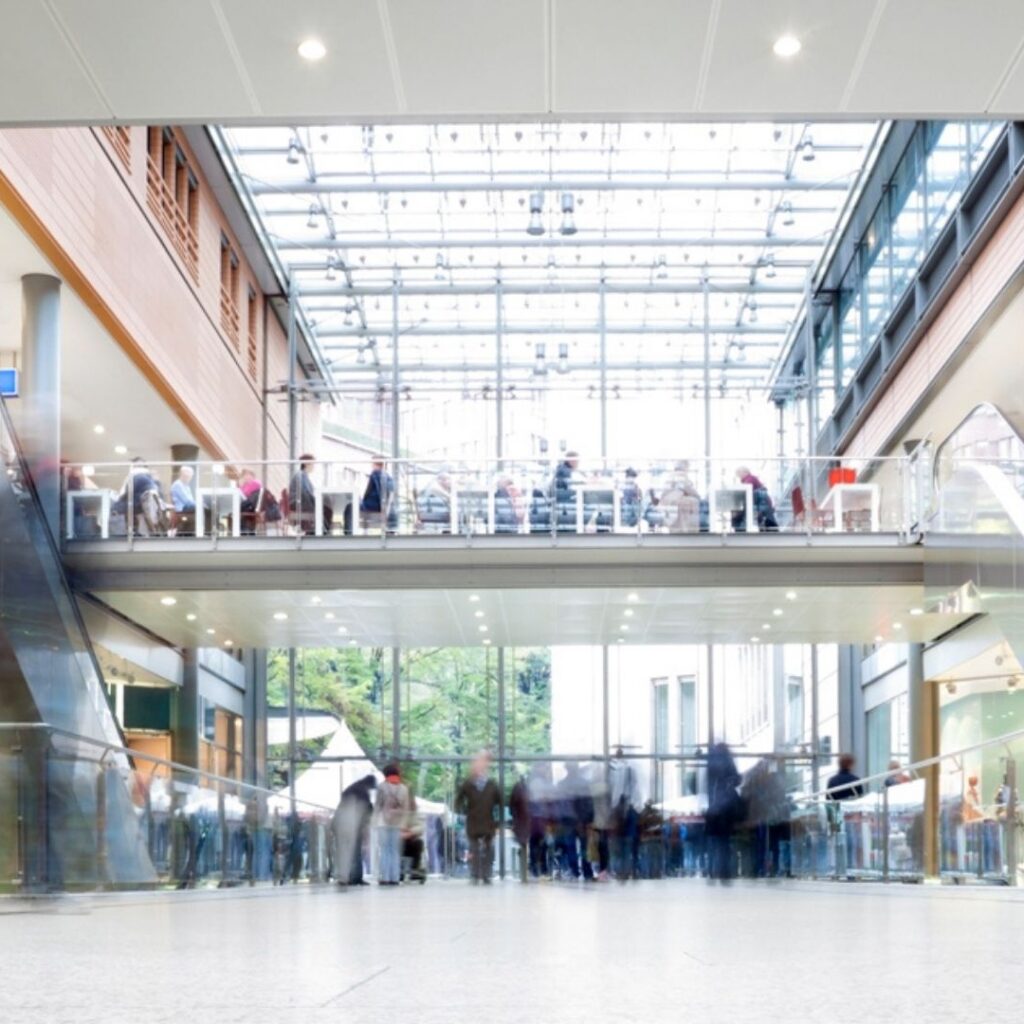 Almost every court hearing in the JCPenney bankruptcy case mentioned a fact that, on its face, seems unrelated to the case itself: that the retailer’s successful resolution would save 60,000 jobs.

The idea, it seemed, was to drive home the point that the death of JCPenney wasn’t just a sad farewell to a once-proud pillar of Americana, but that it remained an important piece of the retail economy.

It was, in effect, too big to fail.

JCPenney filed for bankruptcy early in the pandemic, when stores had been closed for nearly two months, large parts of the country were still under lockdown, and indoor retail sales had plummeted to unimaginable levels. Its bankruptcy during the pandemic followed those of other longtime retailers, such as Neiman Marcus, J.Crew and Aldo.

But, while the pandemic was new, JCPenney’s troubles were not.

The nearly 120-year-old retailer had been in slow decline for more than a decade, and a previous brush with private equity investor Bill Ackman had led to disastrous results in the early 2010s. Since 2018, newly appointed CEO Jill Soltau assembled a team of executives to turn JCPenney around and hired advisers, including law firm Kirkland & Ellis, to help restructure its $4 billion debt load. Despite these efforts, the company’s stock dropped more than 70 percent in 2019, falling below $1 for the first time.

Even so, while the pandemic appears to have brought JCPenney to the point of no return, those 60,000 jobs or so have been saved; some of them, at least, for the short term.

JCPenney’s savior came in the form of its landlords, Simon Property Group and Brookfield Asset Management; the two largest mall landlords in the country chose to buy the retailer rather than let its stores go dark. Earlier this month, the landlords closed on an $800 million deal that will split the company in two: Simon and Brookfield will take over JCPenney’s operations and retain some property, while a group of JCPenney’s lenders will own the remaining real estate and lease it back to the landlords.

The deal values JCPenney at $1.75 billion, but that price tag says more about the landlords than it does about the retailer.

“[JCPenney] ran a sale process, and as far as I know, nobody showed up other than the landlords,” said Adam Harris, a partner at Schulte Roth & Zabel and co-chair of the law firm’s business reorganization group, who has represented the secured lenders in the bankruptcies of several retailers, including Aéropostale, Neiman Marcus and Forever 21. “I don’t know that there’s any true third party who would look at Penney’s, and say, ‘That’s an operating business I want to own that I can make money at.’”

JCPenney started the pandemic with 846 stores nationwide, of which it owned 387, and has closed more than 150 since March, leaving the retailer with 690 stores, according to SEC filings and court documents. In the deal, Simon and Brookfield will keep the stores in their own malls, while the lender group will purchase 160 stores and six logistics facilities.

The sale released JCPenney from Chapter 11 bankruptcy supervision just in time for the holidays, a deadline that Simon and Brookfield had insisted on. The second sale, to the creditor group, is expected to take place in January, and the bankruptcy case is still ongoing.

Once Simon and Brookfield’s bid was proposed in September — reports of negotiations were known earlier — the path forward was almost inevitable, though that didn’t stop the intensity of the process, which led to urgent negotiations and heated hearings, where the various stakeholders hurled accusations of greed, economic terrorism and violence at each other.

Going out of business sale

Simon and Brookfield’s move to buy up one of their failing tenants is part of an accelerating trend. It began with the bankruptcy of teen apparel retailer Aéropostale in 2016 and has continued since, said Harris, who handled the case for the apparel chain.

In the case of Aéropostale, a group of landlords, including Simon and General Growth Properties (now owned by Brookfield), bought the chain together with several liquidators and split the spoils. The landlords agreed to operate the chain based on a reduced store footprint, while the liquidators sold the inventory in the stores that closed.

“It was the first sign that we really saw in the industry that the major landlords were beginning to get nervous about what was going to happen to their mall tenancy, as a result of this sort of transfer from the brick-and-mortar experience to online,” Harris said.

After that, the trend continued, as mall operators, Simon in particular, bought more distressed mall tenants, including Forever 21, which it purchased in February with Brookfield and Authentic Brands Group, whose portfolio includes Juicy Couture and Nautica. Simon and ABG also acquired Brooks Brothers and Lucky Brand in August.

Simon malls included around 160 Aéropostale stores and 100 Forever 21 stores when the chains filed for bankruptcy, compared with about 60 JCPenney locations. But a department store closure has more serious consequences for mall owners than that of a smaller brand, not only because of the loss of foot traffic, but because most mall leases have clauses that allow tenants to reduce rent or adjust their leases if anchor stores go dark.

“Simon and Brookfield are buying JCPenney for one simple reason,” said Shlomo Chopp, a managing partner at Case Property Services (CPS), a commercial real estate workout firm. “If JCPenney goes dark, other tenants can reduce their rent; so they can let JCPenney go vacant, or they can buy JCPenney and keep the occupancy in their malls.”

And the calculus is different for landlords, since they already own the real estate and there’s an embedded cost in keeping it running, said Harris.

“From the business perspective of the operating business you’re buying, so long as it can break even or make money on pure operations, without accounting for rent, then you might as well keep it open and keep it running,” he said. “Because every dollar in excess of the actual cost of operations, you can put in your pocket as rent, which you wouldn’t otherwise be getting if that store were dark.”

Generally, in retail bankruptcies, a profit analysis is conducted on each individual store, and only stores that can be profitable are kept open. Once the mall owners control the operations, they can renegotiate leases with landlords in properties they don’t own on more favorable terms, since those landlords also don’t want to see their stores vacant.

In the case of Forever 21, which had roughly 500 stores at the time of its bankruptcy, Simon and Brookfield controlled about 300 of them, and negotiated with the remaining 200, said Harris.

“They went and looked at store locations subject to leases with other landlords, and negotiated with the landlords there, people like themselves, and said, ‘Would you like to keep the store open or not? And, if you want us to keep it open, here’s the adjustments we’re going to need to our rent obligations. Otherwise, we’re just going to shut it down, liquidate the inventory, and you’re gonna have a dark story in your mall,’” Harris added.

It’s one of the benefits of buying JCPenney, and other retail tenants, out of bankruptcy. “They get to effectively make those kinds of decisions and walk away from those leases without any real liability associated with it,” said Harris.

Still, despite the control the deal affords Simon and Brookfield, and the immediate benefits to their mall portfolios, the sale doesn’t change any of the underlying problems that plagued JCPenney to begin with. Nor can it reverse a retail landscape that has battered malls and the department stores that sustain them for more than a decade, particularly, as the pandemic has accelerated the shift to online shopping.

Plus, though the pandemic has not abated, data shows that JCPenney has not recovered to the extent that some other retailers have since reopening in the spring. In the week ended Nov. 30, foot traffic in JCPenney was down by 38 percent year over year, in line with fellow department store Macy’s, where foot traffic was down 41 percent, but far below the 16 percent gap at discount department store Ross, according to data from Placer.ai. In that same period, overall traffic at Simon and Brookfield malls was down 20 and 27 percent, respectively.

Nevertheless, Harris said that he expects to see this trend of vertical integration between mall landlords and tenants continue and, potentially, fundamentally change how mall assets are valued.

Is there a world in which mall department stores are, in fact, repurposed?

Throughout the JCPenney bankruptcy case, a group of shareholders were convinced that everyone’s favorite mega-retailer, Amazon, was eager to scoop up the department store’s remains in order to use them for logistics centers, or perhaps, to advance Amazon’s own brick-and-mortar ambitions.

From early on in the bankruptcy case, the vocal group of shareholders, whose equity would be totally wiped out if JCPenney went the sale route, opposed the plan, arguing that the sale to Simon and Brookfield was being pushed through because it was lucrative, not because it was the Hail Mary JCPenney claimed it to be.

“The argument from the shareholders was that they weren’t given an opportunity to do a genuine reorganization,” said James Silver, a partner at Kelley Kronenberg and the head of the law firm’s commercial creditors rights bankruptcy practice. “The sale was pushed by the lenders.”

At several points in the case, news outlets reported that Amazon was in talks with Simon over JCPenney’s real estate, which led some shareholders to believe that Simon and Brookfield were setting up the deal so they could flip the properties to Amazon at some future point. (Amazon and Simon, for their parts, never confirmed any such talks.)

While these theories found a home on Twitter and in investment forums and were not widely accepted as fact, their claim that JCPenney’s real estate was more desirable than the parties were owning up to has wider ramifications. If some party other than the landlords was indeed interested in JCPenney’s real estate, that would bode well for the future of mall owners and operators.

But that does not appear to be the case. “I think this whole Amazon thing, it was made into something by some people who want it to be true,” said Chopp, who advises retailers on logistic conversions. “Amazon doesn’t need to buy JCPenney’s carcass.”

Mall locations are not necessarily great for logistics centers, either, Chopp said. Even if they were, it’s a rare case where converting a big-box store into a logistics center is more convenient than simply razing a dead mall to the ground and building ground-up. In addition, it’s unlikely that mall landlords would want them, because logistics centers won’t do anything for mall traffic and industrial rent can’t compare with retail rates, Chopp said.

JCPenney, understandably, rejected the claim that it had exaggerated its financial woes.

“There have been suggestions that this bankruptcy was artificially manufactured and we imposed a fake emergency with the intention of escaping legal review,” Joshua Sussberg, the Kirkland & Ellis attorney representing JCPenney, said during a court hearing in November. “Nothing could be further from the truth.”

If the shareholders are in fact wrong, which they appear to be, and the only buyers for JCPenney were the landlords hoping to avoid the fallout from the retailer’s failure, it’s only a matter of time before the true reckoning over mall real estate arrives.

But until then, the 118-year-old JCPenney will live to see another day.