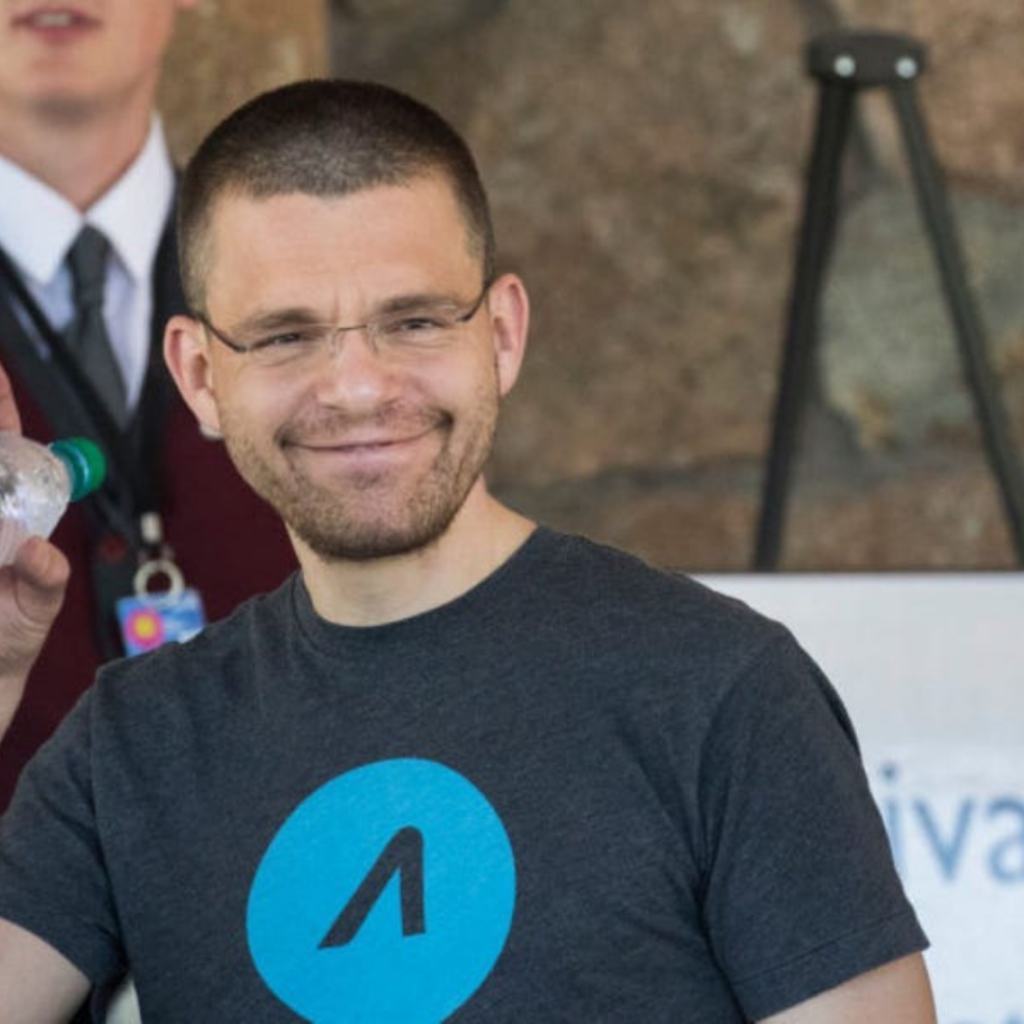 Fintech has been a venture capital hotspot ever since the global financial crisis, a calamity that exposed some serious flaws in an industry long dominated by an upper-crust of traditional names.

In the ensuing years, a host of new companies pitching upstart technologies have begun to gain ground on the establishment, winning over converts among both users and investors. And this week made it clear just how far some of those companies have come.

An eye-popping IPO from Affirm led the way, but more than a half-dozen other fintech startups also made major news. And that’s one of 10 things you need to know from the past week:

Max Levchin, who co-founded PayPal and now leads Affirm, is no stranger to the power of fintech. (Neilson Barnard/Getty Images)
1. Money talks
Affirm tried its best to avoid a huge IPO pop that would leave money on the table. First, the provider of point-of-sale loans delayed its listing in December, in the wake of intense investor demand when Airbnb and DoorDash went public. (Let’s take a moment to appreciate the strangeness of a company being worried its stock might be too popular.) Then, earlier this month, Affirm increased its IPO’s initial price range of $33 to $38 per share to a new range of $41 to $44. Ultimately, it priced its shares even higher, landing on a $49 figure for a debut this Wednesday.

And yet Affirm still opened trading at more than $90 per share and closed its first day at $96.36, up nearly 100% from that already-elevated IPO price. That resulted in a market cap of some $23 billion for Affirm, which was valued privately at $2.9 billion in 2019.

The banner debut is a sign that the IPO market is still going crazy—more on that later in this newsletter. As my colleague James Thorne writes, it could be the first of many significant fintech IPOs to come in 2021, along with names like SoFi, Coinbase and Robinhood. Globally, there were $30.9 billion worth of VC exits in the fintech sector during 2020, according to PitchBook data, the highest total of at least the past decade.

Taken in the context of the past seven days, Affirm’s warm reception also underlines just how bullish investors are feeling about the future of fintech.

Checkout.com, a London-based developer of payments technology, became the most valuable venture-backed company in Europe this week with a $450 million Series C that came at a $15 billion valuation. In Singapore, ridehailing and food delivery giant Grab raised more than $300 million this week for its fintech unit.

Financial data specialist MX, payments provider Rapyd and digital lending startup Blend all raised nine-figure fundings this week, resulting in respective valuations of $1.9 billion, $2.5 billion and $3.3 billion. For MX, that marks a 322% valuation step-up over its most-recent venture round, in 2019. For Rapyd, it is a 108% step-up in a little more than a year. And for Blend, it represents a 94% valuation increase in a mere five months.

Plaid is one of the biggest VC-backed names in fintech, known for its financial infrastructure tools that connect data to various apps and services. In January 2020, Visa agreed to buy the company for $5.3 billion, in what seemed to be a sign of the old financial establishment trying to absorb this new generation.

But the Justice Department objected to the transaction on antitrust grounds. And this week, Plaid and Visa canceled the deal. The fact that Visa isn’t paying a termination fee suggests that Plaid is just fine with the acquisition falling apart. Considering the hot state of the fintech market, it seems highly likely that Plaid could fetch a higher price. And indeed, chatter began almost immediately that Plaid will now instead opt to go public.

We haven’t even gotten to what was probably the wildest part of the week in fintech: the saga of bitcoin. The price of the cryptocurrency has gone crazy since October, rising from less than $11,000 to more than $40,000 last week. Bitcoin then lost nearly 25% of its value between last Sunday and Monday, only to bounce back and regain nearly all that value by Thursday.

It’s been a good time to be a crypto trader. It also seems to be a good time to be a platform where all that trading takes place. We already mentioned that Coinbase is planning an IPO. This week also brought news that two other operators of crypto exchanges are in talks to go public. Bakkt—which is run by Intercontinental Exchange, also the operator of the NYSE—agreed to merge with a SPAC in a $2.1 billion deal. And Gemini—which is owned by the Winklevoss twins of Facebook fame—is considering an IPO, according to a Bloomberg report.

There exists a pretty vast chasm between Affirm and Gemini, or between Plaid and Blend, in terms of what the companies actually do. That demonstrates the breadth of the VC-backed fintech industry that has emerged over the past decade-plus. And the past week demonstrates the depth of investor interest in these different ways of changing how money moves throughout the world.
2. Petco & Poshmark
Let us now return to the frothiest of IPO markets, where companies going from private to public continue to see huge first-day gains. Shares of Poshmark, the operator of an online marketplace for secondhand clothing and other goods, closed its initial day of trading up more than 140% after a VC-backed IPO that raised $277 million. And Petco, a retailer of various pet supplies and services, experienced a 63% first-day surge after raising $864 million in its IPO. Existing Petco backers CVC Capital Partners and Canada Pension Plan Investment Board retain a controlling stake in the company.
3. Political pullbacks
Fallout from the US Capitol riot continues to spread across the private markets. This week, the American Investment Council (a top private equity lobbying group) decided to pause its political donations, and the National Venture Capital Association suspended contributions to lawmakers who opposed certifying Joe Biden’s electoral victory. Meanwhile, Sequoia’s Doug Leone publicly renounced his support for Donald Trump, not long after another prominent Trump backer, Blackstone’s Stephen Schwarzman, also condemned the president.
4. SPACs + EVs = <3
Electric vehicle companies have proven an extremely popular target for special-purpose acquisition companies. This week, the love affair continued. Proterra, which makes electric buses, unveiled a SPAC deal that values the company at $1.6 billion. Faraday Future is in talks to go public by merging with a SPAC at a $3 billion valuation, according to Bloomberg. And Bloomberg also reported that Lucid Motors, which is developing electric luxury cars, is in talks to merge with a SPAC backed by Churchill Capital at a potential $15 billion valuation.

SPACs can’t get enough of the electric vehicle market. (ULTRA.F/Getty Images)
5. Trying again
It was a week for second (and third) chances on the merger market. Cisco struck a new deal to acquire optical networking company Acacia Communications for $4.5 billion, mere days after Cisco sought a court order to prevent Acacia from walking away from a previous sale agreement worth $2.6 billion. And Staples, which is owned by Sycamore Partners, made a bid to buy rival Office Depot for $2.1 billion, following previous failed attempts to buy the company in both 2016 and 1997.
6. Boffo buyout funds
Silver Lake closed its latest flagship fund this week, with a $20 billion haul that was the largest tech-focused vehicle ever raised by a private equity firm, according to PitchBook data. And Silver Lake had company on the mega-fund front. New Mountain Capital closed its latest fund this week with $9.6 billion in commitments, and The Wall Street Journal reported that TA Associates is seeking $11 billion for its next flagship effort.
7. This week in Blackstone
The biggest private equity firm in the world was at it again. Bumble, the dating app backed by Blackstone, filed to go public on Friday. Blackstone was busy in India: Portfolio company Aadhar Housing Finance is reportedly planning an IPO for this year, and the firm agreed this week to sell Aakash Educational Services to Byju’s. And in personnel news, Snowflake CEO Frank Slootman and former US Air Force Chief of Staff David Goldfein have both agreed to join Blackstone as senior advisers.
8. IPO rumblings
Bumble is far from alone in planning an IPO to take advantage of investor enthusiasm. The trend also extends to Europe. In Germany, SoftBank-backed online car marketplace Auto1 is preparing a public debut that could raise €1 billion (about $1.2 billion). And shoe retailer Dr. Martens, which is backed by Permira, filed on Monday to go public in London.
9. Bugging out
Cockroach Labs closed a $160 million funding round this week that came at a $2 billion valuation, a step-up from an $886 million valuation in May 2020, according to PitchBook data. The database management startup doesn’t actually have anything to do with literal bugs. But do you know who does? French startup Ynsect, which uses indoor farming to grow mealworms that it turns into food for animals and plants. This week, the European Food Safety Authority ruled that mealworms are also safe for human consumption, setting the stage for Ynsect to branch into a whole new market.
10. The rights stuff
KKR agreed this week to acquire the rights to the music catalog of Ryan Tedder, the lead singer of OneRepublic, with Reuters pegging the price at nearly $200 million. The deal continues a growing trend of major artists selling off their song rights as they continue to adapt to the rise of streaming and the current absence of concerts. Bob Dylan, Neil Young, David Crosby, Stevie Nicks and Shakira are just some of the other names to strike similar deals in recent months.

BlackRock fundraising up to $4bn for new private credit fund